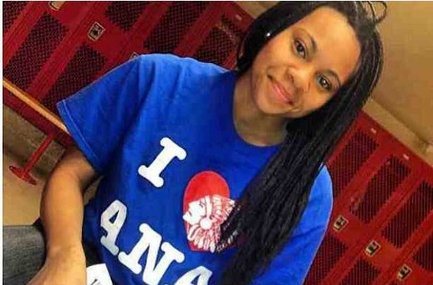 I had the honor of talking with Rashema and I asked her what advice she gives to other youngsters who might give up when faced with adversity.  She said she didn't want to sound cliche' but her advice is, "just keep your head, when you fall down get up, and always be who you are is the most important thing."  I explained to her that it doesn't sound cliche', and that her words actually match her character.  She is anything but cliche'.  She is unique.

Rashema is the valedictorian of her class at Anacostia High in Washington DC this year, and is heading to Georgetown University with $100,000 in scholarship offers. And that is not even the most impressive part of Rashema Melson's story.

Rashema has a 4.1 grade point average and she has kept her grades up despite her family being currently homeless.

Rashema's family lives in the city's family homeless shelter in what used to be D.C. General Hospital. She arrived at the shelter two years ago with her mother and younger siblings.  This decision was made by her mother in order to avoid the violence of their former DC neighborhood.  DC police officers are needed at the close of school every day to escort students home to guard them against the neighborhood gang violence.

Rashema plans to study Forensic Pathology because of the fact that her father was shot and killed when she was only nine months old.  She intends to become a Medical Examiner.

Rashema is talented and gifted, she is also a student athlete.  We are honored to have her be the very first story debuted on our website. To donate to Rashema's cause or to find out more about her click here http://www.gofundme.com/9ntyfk     She is AWESOME!!!