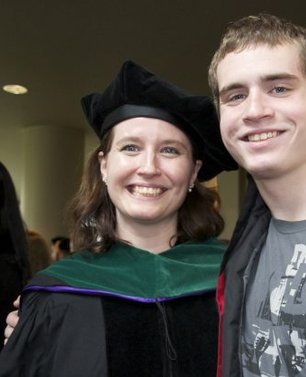 What kind of  AWESOME tale can possibly come from being a homeless teen mom at the tender age of 15?  Just ask April Delira

While living in Anchorage, Alaska, April DeLira wasn't quite yet a teenager when she became homeless.  And to top things off she had just found out she was pregnant as she just began high school.

April was raised with men who she said physically and sexually abused her, so she found life on the street "safer than being at home." There were times when she stayed with strangers, with whom she traded housekeeping services for “a spot on the floor in the corner.”  Other nights she slept in abandoned buildings, or crashed parties in order to have a warm place to lay her head.

Today, though, things have totally changed: She's a resident OBGYN at the University of Tennessee Health Sciences Center in Memphis. She got married four years ago and now has two children, a 3-year-old daughter and her 20-year-old son, Casey.

"It was terrifying when I found out I was pregnant," April, now 35, said of her first pregnancy in 1993. "I found out the day I was going to start ninth grade.”  She was boarding the city bus on her way to school when the revelation hit her.  She eventually dropped out of high school at the age of 15 and with a newborn son in tow. April had been homeless off and on since she was 11 years old, but this time was different.  This time included a child.

"I didn't really see myself as homeless. I don't think I knew what homeless was; I wasn't sleeping on the street," said April. "I considered having a place to sleep at night not homeless -- even if I was staying at an abandoned house. I didn't have a lot of experience. I had a lack of knowledge about what was normal."

She later found her way to a teenage homeless shelter called Covenant House.  She had stayed there when she was 12, using her sister's name because she had to be at least 13 to stay at the facility. April met her first real best friend there, Rose.  They both ended up becoming regulars at the facility.

Teen parents weren't allowed to stay at Covenant House, but she began working with the nonprofit's outreach program after spending four months in Nome, Alaska and then returning to Anchorage. They helped enroll her in educational programs, gave her work and provided a safe place for her son while she worked toward a high school diploma.

When she had no regular place to live, she stayed with friends for weeks at a time, while trying to make a relationship work with her son's father. “It was day-to-day, do what you have to do, and you didn't have the time to think beyond that," said April. "That's what it was like for a few years." She described times in her youth in which she traded "services and things" for food, and other times just went hungry.

She met Barbara Dexter, an outreach specialist, through the Covenant House. Ms. Dexter became an unofficial guardian and a major support system for April.

April got her high school diploma in 1997 at 18 years of age and graduated from medical school this past June.  Barbara Dexter was present for both milestones.  "When my own parents dropped me, didn't show up, didn't call, Casey's dad wasn't there or there was any situation where I was left to feel alone, I could stop and remember that there were a lot of people who cared for us," said April.

She said Covenant House never left her, and because of the "love" she was given there, April said, she will continue to help others like her -- teens and young parents who aren't given the same luxuries that "normal" teenagers are.  April said she and her son have gone to an "extensive amount of therapy to process" all that has happened in their lives, although she doesn't believe that her son remembers much.

Both mother and son have done volunteer work to give back to society and repay what's been done for them.  "I think he forgets sometimes and I have to remind him why we are where we are. I remind him of all the people it took around us to get here," she said.

Casey now lives Seattle while April, her toddler and husband moved to Memphis, where as a professional she's trying to give to those who need her help."We were looking for a place where there was health disparities and low income," April said.

She said she hopes to one day come back to Alaska to help people in rural communities, as specialty doctors can be hard to find in some of the state's more remote areas.